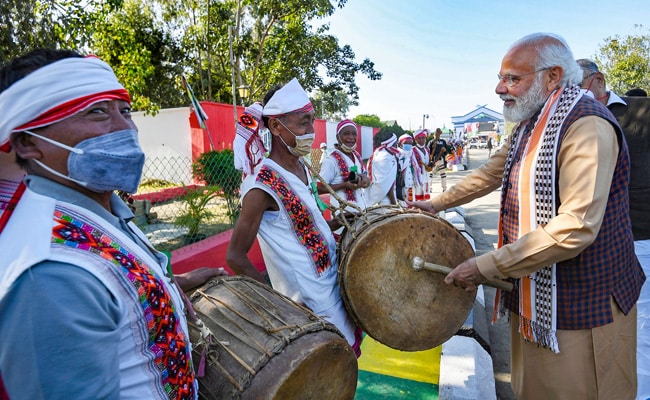 PM Modi was welcomed by folk artistes on his arrival in Imphal.

On his arrival in Imphal, the Prime Minister was welcomed by the folk artistes. He walked towards the artist who was playing gong and tried playing the instrument. He also played the drum.

Addressing the inauguration of various development projects in Imphal, he said that the Northeastern states will become major drivers of India’s growth in the upcoming years with Manipur as the main source of the country’s growth trajectory.

“There was a time when Manipur was left to be on its own. I came to Manipur multiple times before I became the PM. I knew the pain in your hearts. So, after 2014, I brought the entire Government of India to your doorstep,” PM Modi said while addressing the public in Imphal.

The projects inaugurated by PM Modi spanned across sectors such as road Infrastructure, drinking water supply, health, urban development, IT and more.

He also laid the foundation stone of construction of five National Highway Projects to be built at a cost of more than Rs 1,700 crore, with a cumulative length of more than 110 km.