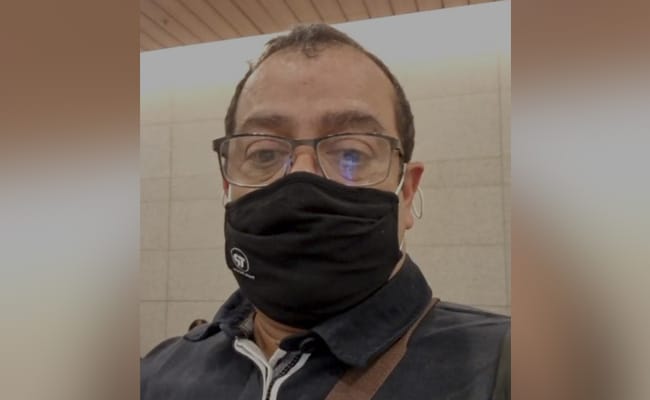 Manoj Ladwa said he and his wife were in Mumbai to attend his father-in-law’s funeral.

An Indian-origin man, a UK national, has alleged that the test and quarantine protocol at the Mumbai airport is a “scam” to mint money.

Manoj Ladwa and his wife arrived in Mumbai on December 30 to attend his father-in-law’s funeral. He tested positive for Covid at the airport test centre.

Having received a negative test report before they boarded the plane from London’s Heathrow airport, Mr Ladwa claims he asked for a second Covid test at Mumbai for confirmation but was refused. He was reportedly shifted to a government-run quarantine facility and missed the funeral.

In a Facebook Live video that he recorded at the airport, an angry Mr Ladwa narrated his version of events.

“I have been magically tested positive at Bombay international airport. These four people are from the same flight as us, Virgin. Apparently, Virgin let so many of these people on a flight who are all positive but were negative yesterday,” he said, urging his friends and acquaintances to “make some noise” over the matter.

“I am here trying to get to my father-in-law’s funeral. Sharmili, her father died 24 hours ago, we rushed to get to India and these people are screwing this over to try and get more money out of us,” Mr Ladwa alleged, adding, “This is just unreal.”

“This is a scam. Apparently Virgin allowed 15 (Covid positive) people onto a flight,” he alleged.

During the 3.43-second clip, voices of other fliers angrily complaining about the test-and-quarantine protocol can be heard. As he switches the camera mode, people can be seen arguing with the testing centre personnel. In another clip, a passenger can be seen asking the authorities for another test.

“There is nobody responsible here. This is scam. It’s a scam. We are being scammed,” Mr Ladwa said. He also alleged that Brihanmumbai Municipal Corporation officials had threatened them that if they do not comply with the guidelines and move to a quarantine centre, they would be charged.

The official website for Mumbai airport lays down the Covid testing protocol, saying results may take up to 8 hours and that passengers who test negative will be allowed to continue their journey. The regular test cost Rs 500. Passengers can also take the Rapid RT-PCR test, priced at Rs 1975, results of which are provided in 1-2 hours.