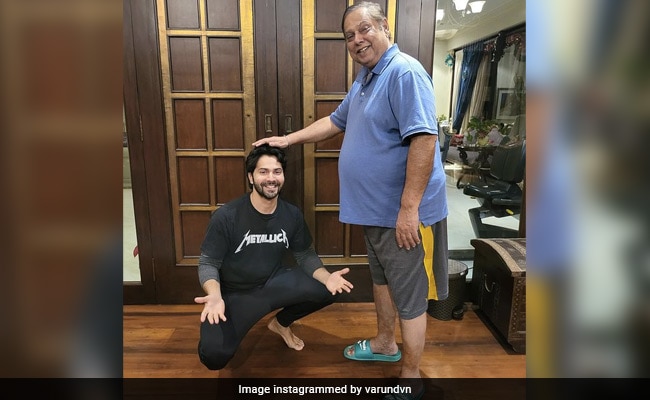 Varun Dhawan has the perfect tip to begin the New Year on a positive note. The actor has shared pictures in which he is seen with his dad, veteran director David Dhawan. In the images, Varun Dhawan is seen seeking blessings from his father as the two smile for the camera in the comforts of their home. Dropping a piece of advice along with the photos, Varun Dhawan wrote, “This year take all the blessings. Happy new year.” The actor’s special post received a lot of love from his fans and colleagues. Fans and friends dumped heart emojis in the comments section and wished the father-son duo a very happy New Year.

Varun Dhawan is a complete family man. The actor recently shared a video with his wife, Natasha Dalal where the couple is seen sharing a kiss in front of a Christmas tree at home. The actor had the song Teri Bhabhi Khadi Hai from his film Coolie No 1 playing in the background. In the clip, he can be seen pulling Natasha towards him and kissing her on her cheek. “Teri bhabhi khadi hain. I had to tell Natasha I’ll shoot this with someone else for her to agree to do this. She may never do another reel with me, haha but she knows how much I love this song and how happy I am that it’s trending after an entire year so she obliged,” he wrote in the caption.

Sara Ali Khan, who featured in the original song with Varun Dhawan replied to the post with heart and hug emojis. Mouni Roy too replied with heart emojis.

Varun Dhawan made his debut in Bollywood with Karan Johar’s Student Of The Year in 2012. He is known for his work in films such as Badlapur, Dilwale, Sui Dhaaga, Humpty Sharma Ki Dulhania and ABCD 2. Varun Dhawan’s upcoming projects include Jug Jugg Jeeyo and Bhediya.