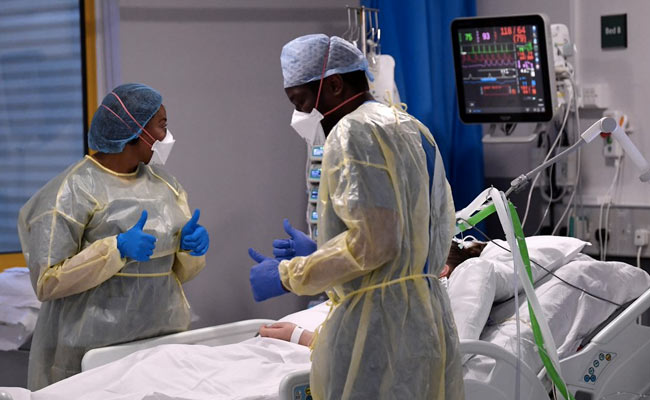 UK’s hospital admissions have not hit anything like the peaks of previous waves of Covid pandemic. (File)

British hospitals have switched to a “war footing” due to staff shortages caused by a wave of Omicron infections, the government said Tuesday, as the country’s daily Covid caseload breached 200,000 for the first time.

The 24-hour tally, after chalking up multiple records in the run-up to New Year, hit 218,724 and another 48 deaths were reported in the latest government data.

Hospital admissions have not hit anything like the peaks of previous waves of the pandemic, and the number of people requiring ventilation has remained flat so far.

But the state-run National Health Service (NHS) is struggling with staff forced to stay at home after testing positive, and Prime Minister Boris Johnson promised action to plug staffing gaps in the worst-hit areas.

The reactivation of emergency “Nightingale” clinics, along with the drafting of medical volunteers backed by army support, meant the NHS was back on a “war footing”, he told a news conference.

“So anyone who thinks our battle with Covid is over, I’m afraid, is profoundly wrong. This is a moment for the utmost caution,” Johnson said.

However, he ruled out another nationwide lockdown, crediting mass vaccinations including a recent programme of booster shots, as the NHS marked a year since administering the first Oxford/AstraZeneca jab.

Transport networks also battled absences, leaving commuters facing long waits on their return to work after a public holiday on Monday, while municipal services such as household bin collections were hampered.

But Johnson said a new programme of daily testing for 100,000 “critical workers”, including in transport and food processing, would help Britain “ride out this Omicron wave”.

Vaccines minister Maggie Throup said it was unclear how many Britons were currently in self-isolation after a Christmas surge in the highly transmissible virus mutation.

“But what is good news, it doesn’t seem to be resulting in severe diseases as some of the other variants did,” she told Sky News.

Around 50,000 NHS staff were reportedly absent from work last week because they were ill or self-isolating.

At least six hospital groups have declared “critical incidents”, which mean crucial services may be under threat. One hospital in Plymouth, southwest England, reported that nearly 500 staff were absent.

Matthew Taylor, chief executive of the NHS Confederation which represents healthcare providers in England, Wales and Northern Ireland, said cases appeared to have levelled off in London.

But he told Times Radio that staff shortages and rising cases across the rest of the country were a concern.

“The unpredictability of staff absence means NHS leaders having to work around the clock just thinking about how they can deploy their resources best to deal with the most urgent and pressing needs,” Taylor added.

“Even using all their imagination and creativity, it is becoming almost impossible, which is why we see hospitals declaring critical incidents.”

Anyone testing positive for the virus has to self-isolate for 10 days, or seven days if they produce a negative test.

There have been calls to ease those restrictions for health staff. But Health Secretary Sajid Javid on Tuesday ruled that out.

Secondary school pupils have been told to wear face masks in class as a “temporary” measure.

Britain has suffered nearly 149,000 deaths since the start of the pandemic in early 2020. But Johnson defended his decision not to increase restrictions over Christmas in England, unlike in other parts of the UK.

“We clearly can’t rule anything out. But what we’re trying to do is take a balanced approach,” he told Tuesday’s news conference.