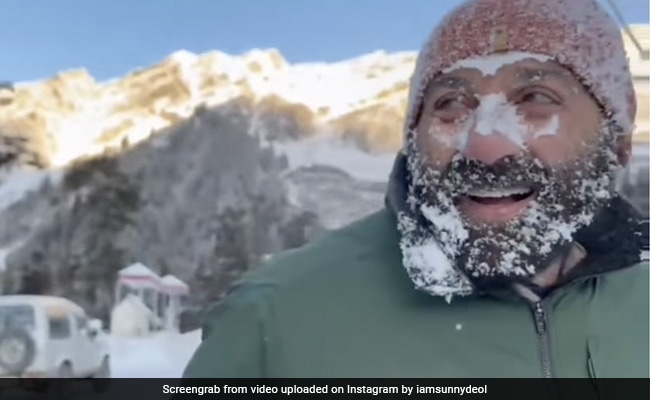 Sunny Deol loves the mountains. Need proof? Just take a look at the actor’s Instagram timeline. The Gadar star began the year having some fun in the mountains. And he did it by dunking his face in some snow and we mean literally. The actor shared a hilarious video of himself dipping his face in snow with his camera in hand. In the clip, the actor looks amused as onlookers around him erupted in laughter. Sunny Deol even added a witty caption to the video. He wrote, “Icing on the cake. Enjoy every moment of life.” Sunny Deol also added the hashtags “Mountains” and “Snow day”.

Sunny Deol bid adieu to 2021 with a montage video of special moments in the last 12 months. This includes pictures and videos of the actor alongside his father, actor Dharmendra and mother Parkash Kaur, much of which were taken in the mountains. Sunny Deol’s sons Karan Deol and Rajvir Deol also appeared in the video. He also added glimpses of the poster of his upcoming film Gadar 2.

Sharing the clip, Sunny Deol wrote, “Goodbye 2021! Hope 2022 will be a better one for the world.”  Replying to the post, Sunny Deol’s younger brother Bobby Deol replied with heart emojis.

That’s not all. Sunny Deol also shared a picture and said that he was welcoming the New Year in the mountains in Manali. “A fresh whiff of mountain air to welcome 2022,” Sunny Deol said in the caption.

Sunny Deol will soon be seen as Tara Singh in Gadar 2. Along with Sunny Deol, Ameesha Patel and Utkarsh Sharma will also be reprising their roles in the sequel.