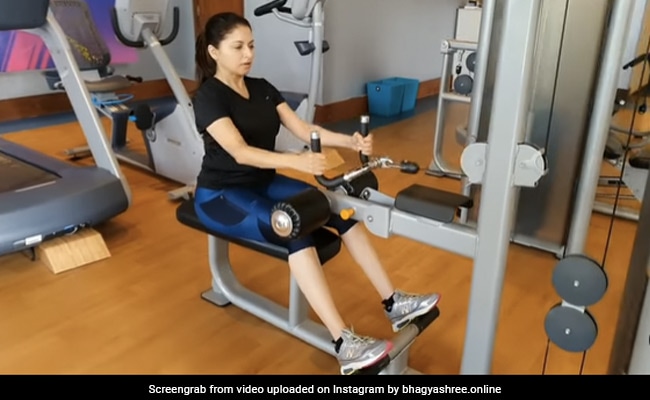 Bhagyashree in a still from the video. (Image courtesy: /bhagyashree.online)

Bhagyashree captured the imagination of the nation with her girl-next-door role in the classic Maine Pyar Kiya. Though the film released in 1989, the actress remains a favourite decades later among cinema lovers. And, if her current pictures and videos are anything to go by it looks like Bhagyashree has managed to find the secret to everlasting youth along the way. Much to our delight, the actress has now shared the secret to her fitness and stunning looks. In a video, the actress said that she “believes in functional training,” which she describes as a mix of callisthenics, yoga, cardio and weight training.

Sharing a video, Bhagyashree said, “Functional training is what I do. Since the requirement of every individual is different, we can’t all follow the same exercise routine. While we all need to be healthy….. fitness is relative to your everyday routine. An athlete, a chef, a lawyer, an actor, a doctor, a homemaker, all have different needs. The physicality of the work they do, the hours of work go a long way in determining what their levels of fitness should be.” She also added that it is best to consult with one’s health consultant or trainer for what suits them best.

In another video shared earlier, Bhagyashree is seen killing it in the gym. Sharing a video of herself performing a complex routine, the star said, “Let’s get going again! Fitness is an important aspect of keeping active. When you can perform your daily tasks and move your body pain-free, you feel energetic to take on the world.” She also added that she was focusing on having a strong back as it helps to build strength.

On another occasion, Bhagyashree also shared a set of pictures in which she is seen beginning her Sunday with Yoga.

Bhagyashree was last seen in a pivotal role in the film Thalaivii. Her upcoming films include Radhe Shyam. Her son, Abhimanyu Dassani is also an actor.