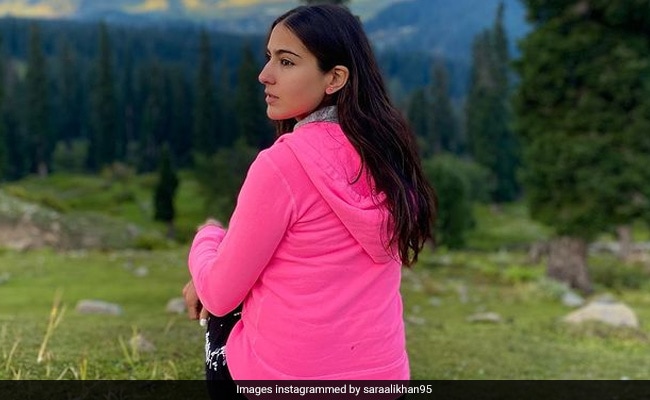 On Monday, Sara Ali Khan shared a series of throwback pictures from her holiday trip to Kashmir on her Instagram handle. The first picture features herself dressed in a blue sweater and black sunglasses. In other pictures, Sara can be seen wearing a pink jacket as she meditates and enjoys the view. Sharing the pictures on social media, the 26-year-old actress wrote: “Major mountain missing, especially the sun kissing.” She also added a hashtag, #throwback in her caption. Reacting to the post designer Manish Malhotra dropped heart emojis in the comments section.

Recently, Sara also shared pictures from her travel diaries on her Instagram account. In the video, Sara can be seen swimming in the blue waters of Maldives, exploring snow-capped mountains and strolling on beaches. “Moments of 2021 that made me feel most alive,” wrote Sara in her caption. The video also features Farhan Akhtar’s Toh Zinda Ho Tum played in the background.

Sara Ali Khan made her Bollywood debut in 2018 with the film Kedarnath, opposite late actor Sushant Singh Rajput. The actress also starred in Simmba, co-starring Ranveer Singh and In Love Aaj Kal alongside Kartik Aaryan. Sara Ali Khan featured in the Coolie No 1 which is a remake of Govinda’s film, co-starring Varun Dhawan. She was last seen in Atrangi Re opposite Akshay Kumar and Dhanush.