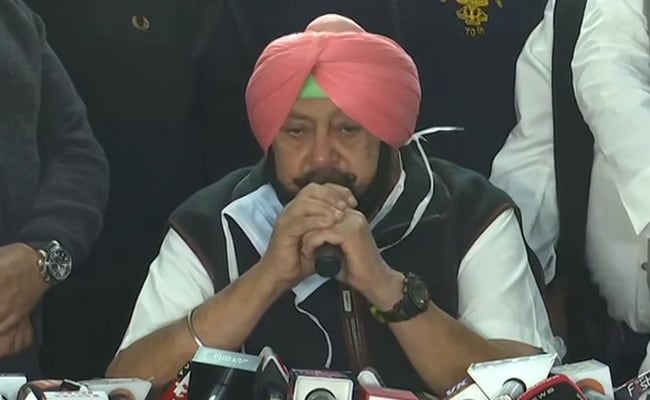 Former Punjab Chief Minister Amarinder Singh slammed the state’s Charanjit Singh Channi government over Prime Minister Narendra Modi’s security lapse today, saying it should step down if it could not ensure “smooth passage” to him.

PM Modi was stuck on a flyover in Punjab’s Bhatinda for around 20 minutes today due to a protest by farmers. Visuals from the spot showed his convoy stranded, with Special Protection Group (SPG) personnel forming a ring around the Prime Minister’s car.

“Complete failure of law and order in Punjab, CM and HM Punjab, in particular. When you cannot provide smooth passage to the Prime Minister of the country and that too just 10km from the Pakistan border, you have no right to stay in office and should quit!” read the tweet of Amarinder Singh, who has formed an alliance with the BJP for the assembly elections that are weeks away.

Complete failure of law and order in Punjab, CM and HM Punjab, in particular. When you cannot provide smooth passage to the Prime Minister of the country and that too just 10km from the Pakistan border, you have no right to stay in office and should quit!

The Prime Minister had to cancel his rally in Ferozepur after the security lapse, for which the Union Home Ministry has blamed the state’s Congress government. The BJP said Chief Minister Channi had ignored calls for help.

“State Police was instructed to prevent people from attending the rally…CM Channi refused to get on the phone to either address the matter or solve it,” tweeted BJP chief JP Nadda.

The Congress accused the BJP of losing “all sense of propriety”, saying 10,000 security personnel were deployed for PM Modi’s rally and all arrangements were made in tandem with SPG and other agencies.

“A route was carved even for all buses of BJP workers from Haryana/Rajasthan. PM decided to take a road journey to Hussainiwala. It was not part of his original schedule to travel by road,” said senior party leader Randeep Singh Surjewala.

Former Punjab Congress chief Sunil Jakhar, however, chose to criticise his party’s government, saying the breach of security was unacceptable and against “Punjabiyat”.

“What has happened today is just not acceptable. It’s against Panjabiyat. A secure passage for the Prime Minister of India to address BJP’s political rally in Ferozpur should have been ensured. That’s how democracy works,” his tweet read.