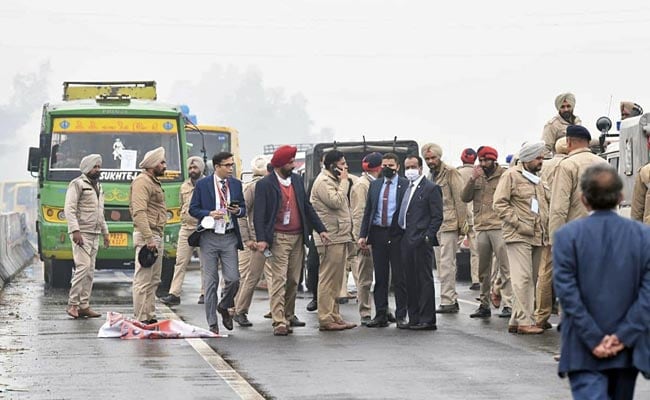 PM cavalcade was met by protesting farmers 10 km ahead of the venue.

The Sanyukt Kisan Morcha, an umbrella body of farmers’ unions, has responded sharply to reports of Prime Modi’s comment that he had “somehow saved his life” during the security breach in Punjab on Wednesday. A farmers’ organisation – the Bharatiya Kisan Union (Krantikari) – had led the protest by farmers on Wednesday that had blocked the Moga-Ferozepur highway, because of which the Prime Minister’s convoy got blocked and he had to turn back without addressing the political rally.

According to news agency ANI, at the Bhatinda airport, PM Modi had told officials: “Apne CM ko thanks kehna, ki mein Bhatinda airport tak zinda laut paaya (Thank your Chief Minister that I could make it alive to the Bathinda airport).”

“It is a matter of great regret that to cover up the failure of his rally, the Prime Minister has tried to malign both the state of Punjab and the farmers’ movement by using the pretext of “somehow saved his life”,” the Samyukt Kisan Morcha said in a statement.

“The whole country knows that if there is a threat to anyone’s life, it is to the farmers from ministers like Ajay Mishra Teni. The United Kisan Morcha expects the Prime Minister of the country not to make such irresponsible statements keeping in mind the dignity of his post,” the SKM said in the statement.

The farmers’ group further said that it is “clear from the video of the occasion” that the protesting farmers did not make any effort to go towards the Prime Minister’s convoy.

“Only a group saying “Narendra Modi Zindabad” raised the BJP flag had reached near that convoy. Therefore, the threat to the life of the Prime Minister seems completely concocted,” the SKM said, hitting out at the BJP.

The Prime Minister was visiting Punjab after around two years – shortly after his government scrapped the contentious farm laws in the wake of a bitter, year-long protest by farmers.

But the farmers, the SKM said, were holding a symbolic protest about their outstanding demands including the sacking of Union minister Ajay Mishra, whose son has been arrested in the case involving the death of farmers in Lakhimpur Kheri.

The BJP has accused the Congress of having “murderous intentions” and deliberately placing the Prime Minister in the way of harm.

On Wednesday, Union minister and senior BJP leader Smriti Irani alleged that planted political instruments were given political patronage by the Congress government in Punjab to breach PM Modi’s security.

The Congress said the BJP should introspect its “anti-farmer” attitude, due to which farmers were protesting against the Prime Minister during his Punjab visit.

Senior party leader Randeep Sigh Surjewala said these protesters were not terrorists and were agitating against the “anti-farmer” mindset of PM Modi and the BJP.