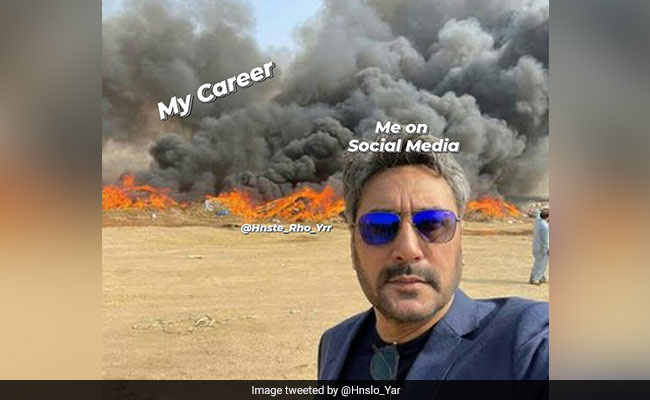 Pakistani actor Adnan Siddiqui has become an Internet sensation with his fiery selfie. Last week, Mr Siddiqui shared photos and videos from a “destruction ceremony” organised by the Customs Enforcement of Karachi to dispose of narcotics by lighting them on fire. In one of the pictures he shared online, the actor was seen calmly taking a selfie as a massive fire raged on behind him. The picture is currently blowing up on Twitter, where it has been turned into a hilarious meme.

“Lit fire to narcotics at the Destruction Ceremony of Confiscated Goods organised by the Customs (Enforcement) Karachi,” Adnan Siddiqui wrote while sharing visuals from the event on Instagram. He added that the department destroyed liquor, cigarettes and betel nuts contraband valued at around $2.5 million.

The selfie quickly made its way to Twitter, where users lost no time in creating hilarious memes with it. Take a look at some of the funniest #AdnanSiddiqui memes that have taken over the microblogging platform:

I try this for the first time#AdnanSiddiqui
Adnan Siddiqui pic.twitter.com/OkJru0WVn9

get ready for the memes #AdnanSiddiquipic.twitter.com/GAKT04t5X3

So here’s mine
LOL ????????#AdnanSiddiquipic.twitter.com/dlSHgALOGC

While many celebrities would be wary of being turned into a meme, Mr Siddiqui seems to be enjoying his newfound social media fame. “I have finally arrived!!! How you ask? Well, when your memes start trending all over social media, you have moved up the ladder,” he wrote on Instagram yesterday.

Which meme made you laugh out loud? Let us know using the comments section.