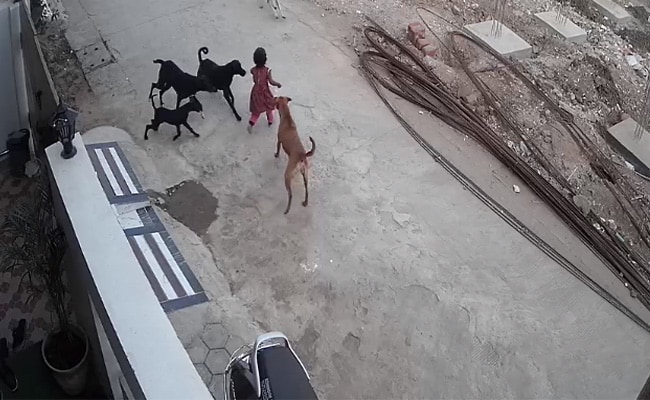 The incident took place in Bag Sewania area of Bhopal.

A four-year-old girl was chased, pulled to the ground and then bitten by a pack of dogs in a horrific video captured on a CCTV in Madhya Pradesh’s capital Bhopal

The stray dogs left the girl only after they were chased away by a passerby. The child has been hospitalised with severe injuries.

Horrific! Stray dogs mauled a 4 year old girl in Bhopal a passerby threw stones at the dogs and chased them away. The child has been hospitalized with severe injuries. pic.twitter.com/X4EyruZxra

The girl, a daughter of a labourer, was playing outside her house when she was attacked by the pack. The dogs surrounded her and bit her on her head, belly and legs as she attempted to escape. She was then pulled to the ground by the dogs, which continued to attack her, shows the video from a CCTV in Bhopal’s Bag Sewania. The attack continued for a few minutes before a passerby intervened and chased away the dogs.

Street dogs have become a terror in Bhopal.

Last year, a seven-year-old girl was attacked by stray dogs in presence of her mother in Kohefiza area.

In 2019, a six-year-old boy was mauled to death by half a dozen stray dogs in front of his mother. The boy’s mother faced severe injuries when she tried to save him.

According to reports, Bhopal has over 1 lakh stray dogs.