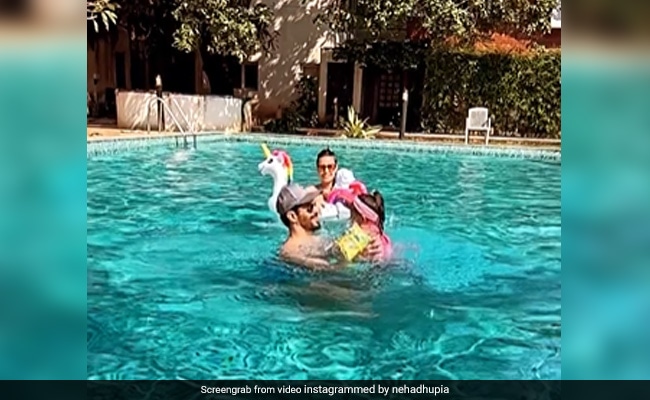 Neha Dhupia and Angad Bedi have begun the New Year on the sweetest note possible. The couple chose to begin the year by spending some quality time in the pool. And, the much-in-love couple was not alone but accompanied by their daughter Mehr and their son, who they welcomed last year. In a video shared on Instagram, Angad Bedi is seen playing with Mehr by throwing her up in the air and catching her, while Neha Dhupia looks on with a smile and her infant in her arms. The actress added the Jaymes Young song Happiest Year in the background.

In the caption, Neha Dhupia kept it simple with an evil-eye amulet, heart and unicorn emoji, tagging Angad Bedi, Mehr Dhupia Bedi along with the hashtag “Baby Bedi”, referring to her son.

The couple also ended 2021 with an adorable photo of them sharing a kiss with the beach in the background. In the picture, Angad Bedi is seen with Mehr in his arms, while their son is strapped to Neha Dhupia.

In the caption, Neha Dhupia wrote, “No regrets, no resolutions only gratitude. Bye 2021… be kind 2022.” Reacting to the post, Neha Dhupia’s friend, Saba Pataudi said, “Love caption…Agree. Have a good one N! And family.”

Recently, on the occasion of Christmas, Neha Dhupia and Angad Bedi shared a video montage of family photos. This time around, the family of four is seen wearing matching pyjamas in red and white. “Wish upon a star… Merry Christmas. This is what ours looked like. Hope you all had a lovely one.”

Neha Dhupia also shared a set of pictures of the family on the occasion and wore, “Welcome to our crazy, chaotic, cheerful Christmas… This is all that a girl could wish for and more. Thank you, Santa, those years of leaving cookies and milk out really worked. Merry Christmas from ours to yours.”

On the work front, Neha Dhupia was last seen in the film Sanak. Her upcoming film is A Thursday. Angad Bedi, meanwhile, is known for his work in Gunjan Saxena: The Kargil Girl, The Zoya Factor and Inside Edge.