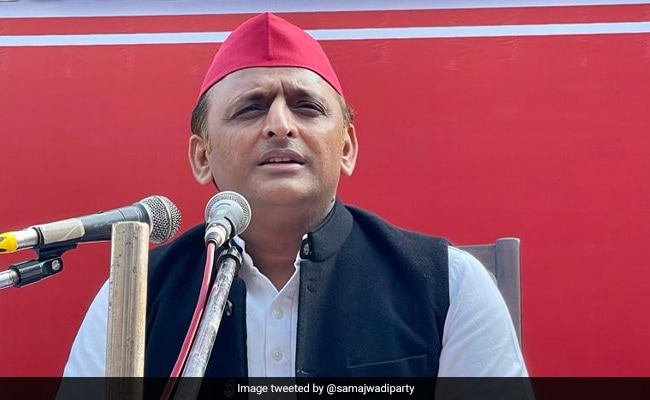 Akhilesh Yadav’s remark came during a function held for the induction of a BJP MLA into his party. (File)

Samajwadi Party chief Akhilesh Yadav on Monday claimed that Lord Krishna comes to his dreams every night to tell him that he would form the government and establish “Ram Rajya” in Uttar Pradesh after the state’s upcoming assembly polls.

Former UP chief minister Mr Yadav made the claim, albeit in a lighter vein, during a function held for the induction of BJP’s Bahraich MLA Madhuri Verma into his party.

A Kurmi by caste, Ms Verma is a second-time MLA. She was also a member of UP’s Legislative Council from 2010 to 2012.

Elated over the induction of sitting BJP MLA from the Nanpara assembly seat in Bahraich district, Mr Yadav asserted that he is on his way to form government in Uttar Pradesh.

“The way to Ram Rajya is through the path of samajwad (socialism). The day samajwad is established, the “Ram Rajya” will be set up in the state,” the SP president said.

He went on to add, “Lord Sri Krishna comes to my dreams every night to tell me that our government is coming up (in UP).” He also claimed that the Yogi Adityanath government has “failed” in the state.

Alluding to a galaxy of BJP leaders doing the poll campaign in UP, Mr Yadav referred to the infamous practice of some students’ guardians in some states, including UP and Bihar, descending on their examination centres to help their wards resort to unfair means.

And then dubbing Yogi Adityanath as having failed as Chief Minister, Mr Yadav likened the BJP leaders’ poll efforts to those of students’ guardians to help a “failed” Mr Adityanath win the UP polls.

Reacting to the BJP allegation of his party having several criminals and gangsters, Mr Yadav retorted, “It is the allegation of a party which made a man facing several heinous criminal cases the UP chief minister.”

“I wonder if the BJP has bought a washing machine to cleanse all its criminals and mafia elements,” he wryly said.

“There were many veteran leaders in the BJP who strengthened the party for years with their blood and sweat. Even they say at times that it was they who sweated it out for the party but don’t know where did Adityanath come from and was forced upon them,” Mr Yadav said.

On a question on Chief Minister Yogi Adityanath’s statement that he would contest the upcoming assembly elections from wherever his party wants, Mr Yadav said irrespective of where he fights from, he would face grilling from the people on his “failed” promises, including the doubling of farmers’ income.

To a question on his own seat for contesting the assembly polls, Mr Yadav said his party will take a call on this.

On senior IAS officer Durga Shankar Mishra being made the UP’s new chief secretary, the SP chief said, “Our baba mukhyamantri was sleeping and suddenly his chief secretary was changed and he did not know. He himself says I sleep till 12 noon.”

On his poll promise of providing 300 units of electricity free to domestic consumers, if the SP is voted to power, Mr Yadav said it is the BJP, which has got the maximum shock from his free power promise.

He said the promise was made because the SP in its previous tenure from 2012 to 2017 had started several power projects which were never completed by the BJP government.

If he is voted to power, he said, those projects will be completed and all the domestic consumers will get 300 units of electricity free of cost.