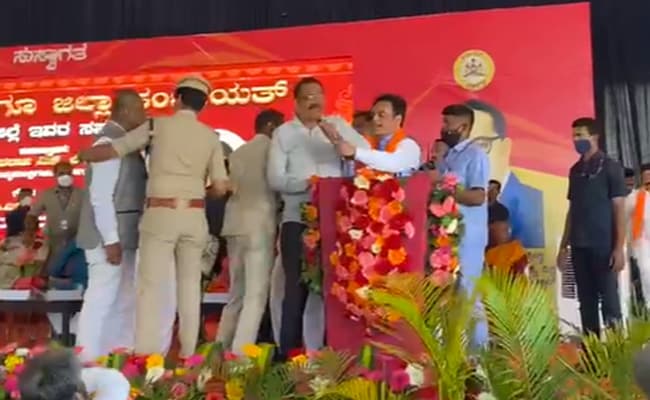 The government event was to unveil the statues of BR Ambedkar and Bengaluru founder Kempegowda.

This was also Mr Bommai’s first visit to the district as the Chief Minister.

In what seemed like a veiled attack on Congress leaders, Mr Narayan made an aggressive speech targeting opponents.

He claimed that the present BJP government was here to win the trust of the people and not to betray them, and challenged others to prove their work, as he attacked those who allegedly tried to disturb the event by raising certain slogans.

This apparently enraged Mr Suresh, and the MP, who was visibly angry making certain gestures, barged towards Mr Narayan.

Security personnel and some dignitaries on the stage including Health Minister K Sudhakar intervened and separated the two.

Mr Suresh, the younger brother of state Congress chief DK Shivakumar, was joined by Congress MLC S Ravi, who tried to snatch the mike that was used by Mr Narayan, resulting in a melee, as the Minister forcefully grabbed the mike back from him.

Mr Suresh and other Congress leaders subsequently sat down on the stage in protest.

Amid the protest, Mr Bommai, addressing the gathering, said individual egos should not come in the way of respecting icons like Ambedkar and Kempegowda.

Pointing out that he has come to Ramanagara for the first time as CM, he said, “I have come here to contribute to development. The development will happen with everybody’s cooperation and not by one individual….let’s all work together for development….” Mr Suresh, who spoke later, said he would only apologize to the Chief Minister for what happened and not to anyone else, and attacked Mr Narayan in his speech.

“Are you challenging us on the stage? fix the time….what culture is this? Did RSS teach this?…..Don’t talk about our culture, we have culture. Mr Ashwath Narayan, we need not learn from you,” he said.

As Mr Suresh referred to RSS, BJP supporters among the audience objected to it.

Later, after the event, Congress workers tore up Mr Narayan’s posters as the mark of protest.

Mr Bommai, later speaking to reporters, termed the incident as unfortunate and said it will in no way affect his government’s commitment for the development of Ramanagara district.

“We should all work together for development….there is no need to create an atmosphere of election, much before the election,” he said.

Stating that the incident is the best example to prove that Congress culture is “goonda culture”, state BJP in a tweet, condemning it, said “it is ironic that an MP doesn’t have the basic sense as to how to behave on the stage, where the Chief Minister is present.” Several BJP leaders including its state President Nalin Kumar Kateel and Narayan’s cabinet colleagues condemned Suresh’s conduct.

Meanwhile, jumping to his brother Suresh’s defence, Congress President DK Shivakumar questioned Ashwath Narayan’s relationship with Ramanagara. “What has he or BJP done for the district? It is sheer arrogance on part of the Minister.” Congress and JD(S) are major players in Vokkaliga dominated Ramanagara district, where BJP is attempting to make inroads.

Narayan, a Vokkaliga himself, who was earlier the in-charge Minister of Ramanagara, is at the forefront of BJP’s attempts to make inroads into the district by taking on the ‘DK brothers’ (Shivakumar and Suresh), and today’s incident is seen as a sequel to those efforts.