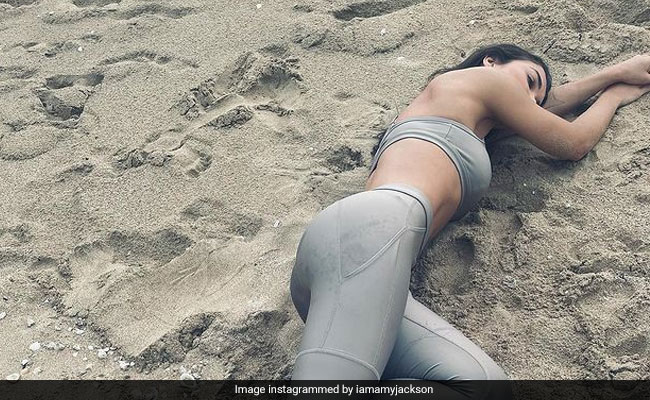 Amy Jackson is one happy soul. The actress, who is a water baby, welcomed the New Year by doing what she loves – spending time on the beach. In a series of pictures, Amy Jackson is seen posing on the beach and spending time lazing on the sand. In a third picture, she even treated us to a lovely black-and-white selfie with the waters in the background. Dressed in loungewear, Amy Jackson looked at home amid the waters. In the caption, the star wrote, “New Year energy (tornado emoji).” Fans of the actress rushed to the comments section and praised her for the stunning pictures.

On the occasion of New Year, Amy Jackson shared several pictures summing up what the week between Christmas and New Year looked like. The post contains images of Amy Jackson with her son Andreas Jax Panayiotou, her friends and even a video of the waves ebbing and rising on the beach. We also spotted a photo of Amy Jackson cuddling with her pet dog on the bed.

Sharing the post, Amy Jackson wrote, “The bits and bobs which made that weird little week between Christmas and New Year a goodun.”

Before that, Amy Jackson had also shared a video of herself having a fun day out with her son. In the video, the mother-son duo is seen frolicking in the garden, visiting what appears to be a local fair and munching on goodies. In the caption, Amy Jackson wrote, “We don’t need no mistletoe.”

Amy Jackson is known for her work in films such as Madrasapattinam, I, Thanga Magan and The Villain, among others. She also appeared in the television show Supergirl.