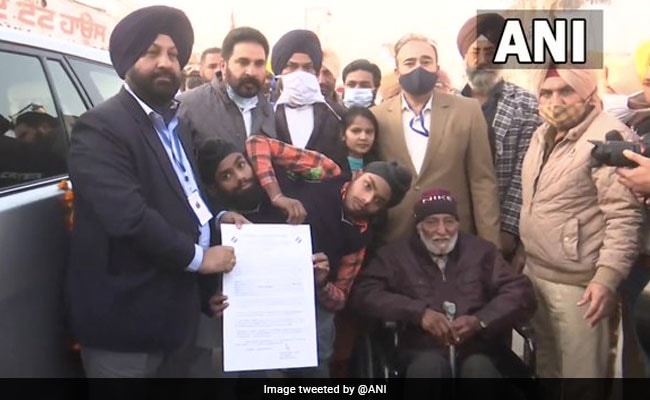 Punjab Polls: Sohna and Mohna voted at a polling booth in Amritsar.

Sohna and Mohna, the conjoined twins from Amritsar who had bagged a state government job last year, were among the early voters who cast their vote as polling began across 117 seats in Punjab today.

Pictures shared by news agency ANI showed officials welcoming the conjoined twins as they arrived at polling booth in Amritsar.

Since Sohna and Mohna are two separate voters, special arrangements were made to ensure secrecy among the conjoined twins.

“It is a very unique case. The Election Commission told us to do proper videography. They’re icons of PWD voters. They’re conjoined but two separate voters. Arrangements were made by the RO of giving them goggles so that secrecy of voting is maintained,” Gaurav Kumar, PRO, was quoted as saying by news agency ANI.

Sohna, 19, got the job and started working on December 20, 2021. He, along with Mohna, looks after the electrical appliances at PSPCL, an official said.

The twins were born in New Delhi on June 14, 2003 with two hearts, arms, kidneys and spinal cords, but a shared liver, gall bladder and legs. After birth, Sohna and Mohana had been abandoned by their parents and were taken to Delhi’s All India Institute of Medical Sciences. The doctors at AIIMS decided against separating them as the surgery could have fatal complications.

After weeks of high voltage poll campaigning for Punjab Assembly elections, over 2.14 crore voters of the state will decide the fate of 1304 candidates in the fray from 117 constituencies on Sunday. Polling began across 117 seats in the state at 8 am today.