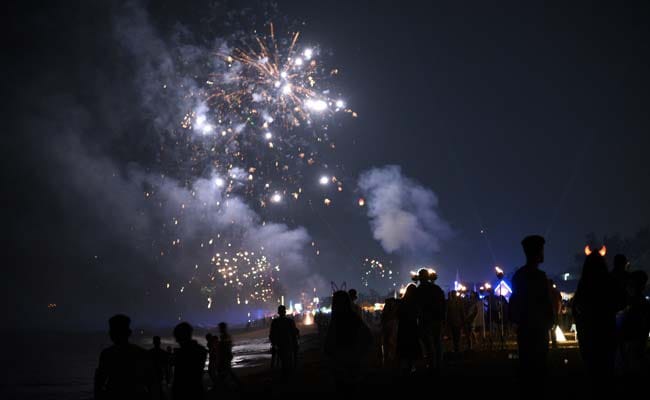 Goa has seen a sizeable number of tourists since late December. (PTI)

Goa recorded a massive jump in coronavirus cases on Monday, at 388, with over 10 percent of COVID-19 tests returning positive. The coast state now has 1,671 active cases. The huge spike in Covid cases has prompted the state government to impose curbs, including night curfew, to control the spread of the virus.

Goa has seen a sizeable number of tourists since late December with revellers arriving in the coastal state for the Christmas-New Year festival season.

The huge influx of tourists, officials say, has pushed up the COVID-19 positivity rate, which crossed 10.7 per cent on Sunday.

On Sunday, a video of a huge crowd at a popular tourist spot in North Goa was widely shared on Twitter.

“This is a Royal welcome to the Covid wave. Mostly tourists,” the Twitter user, who goes by the handle @Herman_Gomes, wrote.

The video shows hundreds of people walking on a road near Baga Beach in North Goa.

This was Baga Beach in Goa ,last night. Please take the Covid scenario seriously. This is a Royal welcome to the Covid wave Mostly tourists. pic.twitter.com/mcAdgpqFUO

Schools and colleges in the coastal state have been ordered to shut down till January 26 in the wake of a rise in COVID-19 cases.

“It has been decided to close the physical sessions for classes 8 and 9 in schools from tomorrow till January 26,” Shekhar Salkar, a member of the Task Force, told reporters in Panaji.

Students of classes 11 and 12 would have to attend the school to take the vaccine against COVID-19. “Once they are vaccinated, they need not attend the classes till January 26,” Mr Salkar said.

The official further said the order for imposing night curfew between 11 pm and 6 am everyday will be issued by the state administration either on Monday or Tuesday.

The weekly COVID-19 positivity in the state is around five per cent due to which the restrictions have been imposed, he said.

The state government would also enforce restrictions on indoor activities, he said.

Thousands of domestic tourists gathered at beaches, pubs and nightclubs in Goa to ring in the New Year, even as the government imposed tougher restrictions to curb the latest variant of the coronavirus.

At least 2,000 people on board a ship from Mumbai to Goa have tested positive, news agency ANI reported.

The crew member on Cordelia Cruise were isolated in the ship itself and the RT-PCR tests of 1471 passengers and 595 crew members were done. The reports of the tests are awaited.

The ship is currently harboured near the Mormugao Port cruise terminal, Vasco.

With inputs from agencies