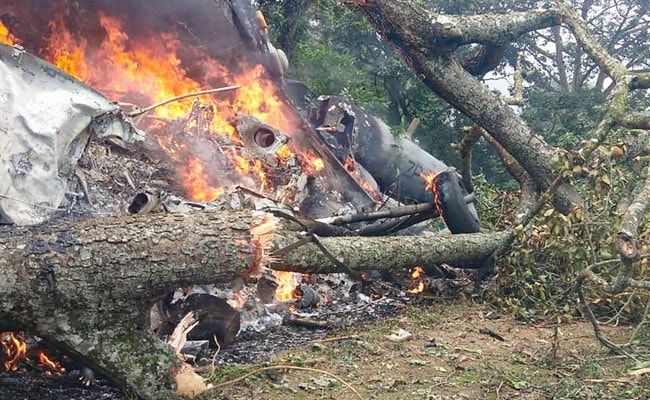 Defence Minister Rajnath Singh is to be briefed by Air Force officials at 11 am on the report into Chief of Defence Staff General Bipin Rawat’s helicopter crash.

A tri-services inquiry had been ordered into the chopper crash in Tamil Nadu’s Nilgiri Hills on December 8 that killed Gen Rawat, his wife Madhulika, and 11 other armed forces personnel.

The investigating team, with top Air Force officers, will meet Mr Singh and senior officials from his ministry this morning to present their findings.

Neither the Air Force nor the government has made any statement yet on the report or its conclusions, but sources indicated to NDTV last week that reduced visibility due to bad weather may have contributed to the crash.

There has also been no statement or explanation so far on whether pilot error was the underlying cause of the accident, or whether rules for operating within clouds in hilly areas were disregarded.

Sources told NDTV the Court of Inquiry – led by Air Marshal Manvendra Singh, the country’s top helicopter pilot – believe the pilot of the MI-17v5 that crashed may have been left disoriented by inclement weather and accidentally flown into terrain.

This is referred to as CFIT, or Controlled Flight Into Terrain.

Sources also said the inquiry ruled out any possibility of technical errors or mechanical defects.

The Russian-made Mi-17V5 helicopter – which several former armed forces officers have told NDTV is extremely reliable and very safe – crashed seven minutes before it was due to land.

In the days after the crash mobile phone videos – taken by locals and shared by news agency ANI – emerged of the final moments of the chopper; one clip shows a helicopter flying into the mist that hung over the Coonoor hills and a change in the chopper’s engine sound can be heard.

Gen Rawat, his wife, and all those on board were given funerals with full military honours, and thousands paid tribute to their memories, including the governments of major foreign powers.