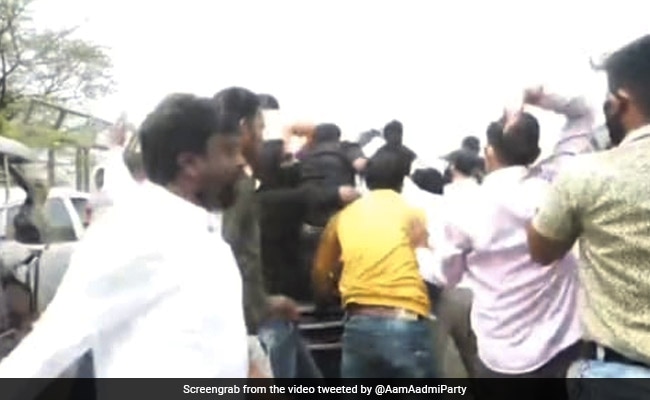 Some people climbed onto the bonnet of Satyendra Jain’s vehicle and protested against him.

The Aam Aadmi Party on Sunday alleged that BJP “goons” attacked the convoy of its senior leader and Delhi Health Minister Satyendra Jain.

The Delhi unit of the BJP has rejected the charge. The party said residents of the Chawla area in Delhi’s South-West district had protested against the new liquor policy of the Arvind Kejriwal government.

In a series of tweets, the Aam Aadmi Party (AAP) alleged that the Delhi unit of the BJP deployed its “hooligans” to attack Mr Jain’s convoy as it realised that it is going to lose the upcoming civic body polls.

On the microblogging site, the party also posted a video footage of the alleged attack. “This is BJP. It’s a party of hooligans and ruffians. When they are losing, they show their position. People will tell them their position,” Delhi Chief Minister and AAP national convenor Arvind Kejriwal said in a tweet.

“There was no goondaism against Minister Satyendra Jain, only local residents of the Chawla area protested against the new liquor policy of the Kejriwal government,” Delhi BJP spokesperson Praveen Shankar Kapoor said in a statement.

“It is really sad that the Aam Aadmi Party, which was born out of a agitational movement today cannot tolerate a people’s protest,” he added.

A senior police officer said when the minister was passing through Najafgarh, some people climbed onto the bonnet of his vehicle and protested against him.

“His vehicle had to be halted due to protest by some locals over alleged issues of governance etc,” the officer said. A team of police reached the spot “immediately” as soon as information was received, the officer said.

“Within 10-15 minutes, the way was cleared and he went peacefully without any further disturbance on his way ahead,” the officer added.

Police said no complaint has been received so far.

“If any complaint is received, legal action will be taken accordingly,” it said.